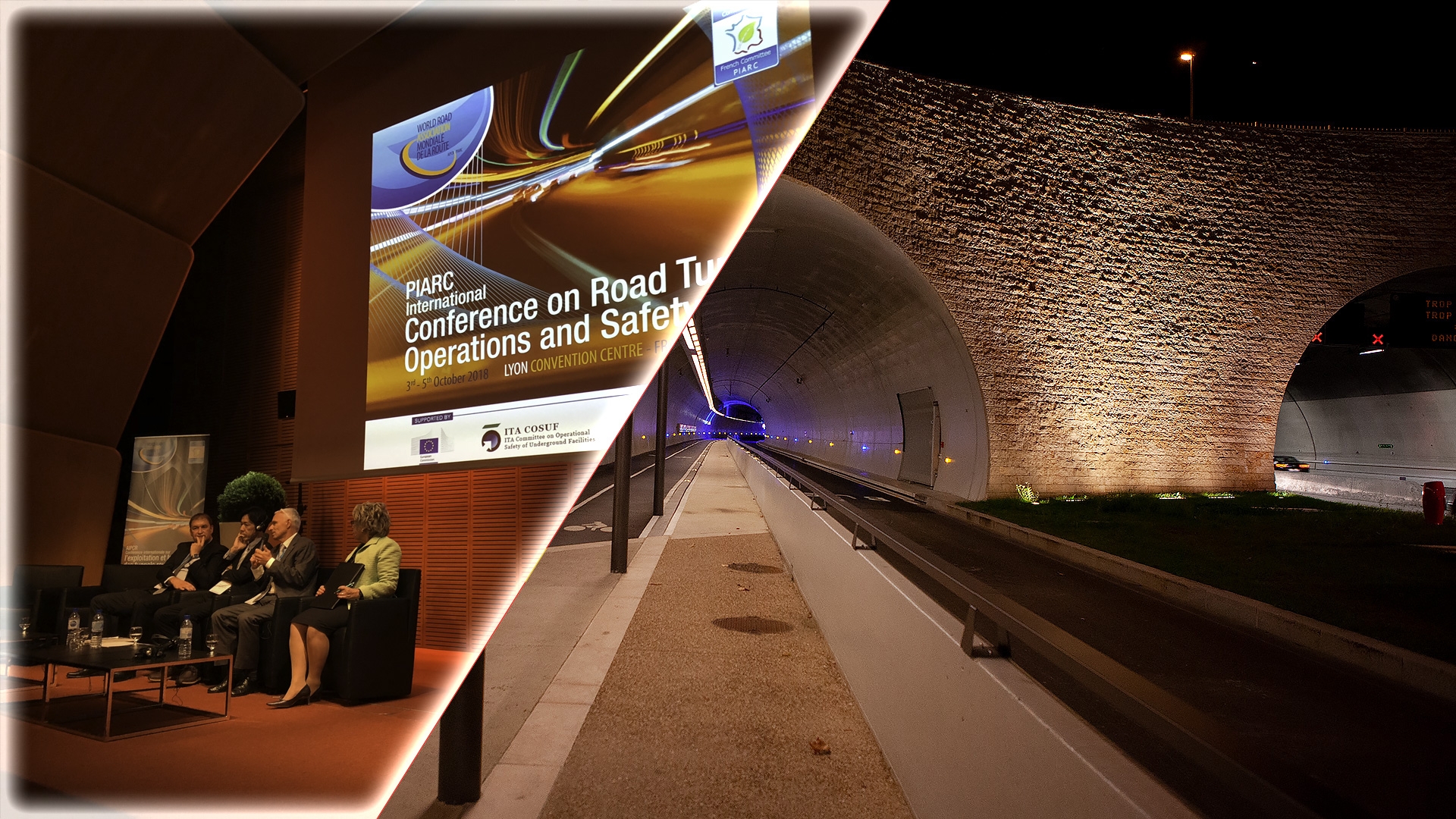 By
Arild P. Sovik Event Reports 2018-10-08 Hits: 1183
International experts from The World Road Association (PIARC), The International Tunnel Association Committee on Safety in Underground Facilities (ITA-COSUF) and in total over 300 experts from all over the world came together last week in Lyon to discuss road tunnel operations and safety. Among other important topics, leading experts are concerned about lack of research on risk and danger related to new energy carriers in underground facilities and call for actions from authorities and responsible bodies.
The event was organised with the support of the European Commission, ITA COSUF, the French Centre for Tunnel Studies and the French-speaking Working Group of Road Tunnel Operators, and was aimed at tunnel owners, operators, rescue services, designers, tunnel safety officers, equipment suppliers and installers. In front of the conference, both PIARC and ITA-COSUF held committee meetings discussing ongoing work and future contributions from the committees.

Gary Clark from the team at Atkins, an expert with knowledge of tunnel risk, emergency operational procedures, ventilation analysis and fire & life safety issues, gave a presentation on Alternative fuels and the future of road tunnels and road tunnel design. Gary Clarks presentation and the discussions that followed concluded that we know to little about risk and danger with new energy carriers, and we need more research to prepare proper mitigating measures and safety concepts for underground facilities for dealing with new energy carriers in the context of the design of tunnel safety systems, extinguishing agents, escape and rescue routes as well as measures for emergency services.

We where also presented an Overview of tunnel safety measures in Japan, by Atsushi Ichikawa from the East Nippon Expressway Company. Japan is definitely one of the large nations when it comes to tunnels, and have an impressive experience when its comes to tunnels in operation, tunnel safety and incidents. Atsushi Ichikawa emphasises the use of technology to detect fire early, initiate early closure, alert those in the tunnel about evacuation and use led light and signs to evacuate safely.  Further on, Japan have concluded that it is important to make sure people have the best conditions to escape, and for bidirectional tunnels they balance the ventilation in such a way that a slow draft speed (ventilation) will give the necessary control of smoke without comprise with the safety on the evacuees. Further on active fire fighting systems are in use and is an important part of the safety measures for several tunnels. One of the things that impressed me specifically is that important information for the general public in Japan concerning tunnel safety are published and available.

Using ITS to improve safety in road tunnels was another topic and was presented by Henric Modig from the Swedish Road Authorities. There are still preparations and work to be done to make sure that we have proper standards for autonomous and connecting vehicles in underground facilities. We also learned that PIARC will present a technical watch document on the topic later in 2019. Most likely will this also be a head topic for PIARCs Tunnel Operations committee in the next cycle (2020 - 2023).

Several refurbishment projects was presented, like the Croix Rousse tunnel project in Lyon. A presentation on Innovative use of a safety gallery for environmentally friendly modes of traffic by Mathieu Hermen from La Métropole de Lyon, gave us an insight in the decisions prior to the project, but also the final results. The safety gallery Le tube runs in parallel with the 2 km Croix Rousse road tunnel and is a mixed traffic tunnel where regular road traffic is in one tube and pedestrians and bicycles are in a second tube (Le Tube). In addition busses have a separate lane in the pedestrian/bicycle tube. Le Tube is more or less a continuous art experience, with sound effects and projected images combining to create a fantasy realm of light, and has been a huge success for the public in Lyon. Every year the city of Lyon invite public in to Le Tubefor the longest meal served on one table.

The third day of the conference was dedicated to optional technical tours to tunnels in the Auvergne-Rhône-Alpes region (Croix Rousse Tunnel, Violay, Bussière and Chalosset Tunnels (A89 motorway), Mont Blanc Tunnel and Fréjus Tunnel).

All in all one of the best conferences I have attended. Great location and facilities, and a program that emphasis relevant topics and not at least high quality discussions between moderator, speakers and delegates, gave us a added value beyond what we normally expect. A big thank to The Tunnel Operations committee in PIARC, supporting organisations and the french team for a well organised event!