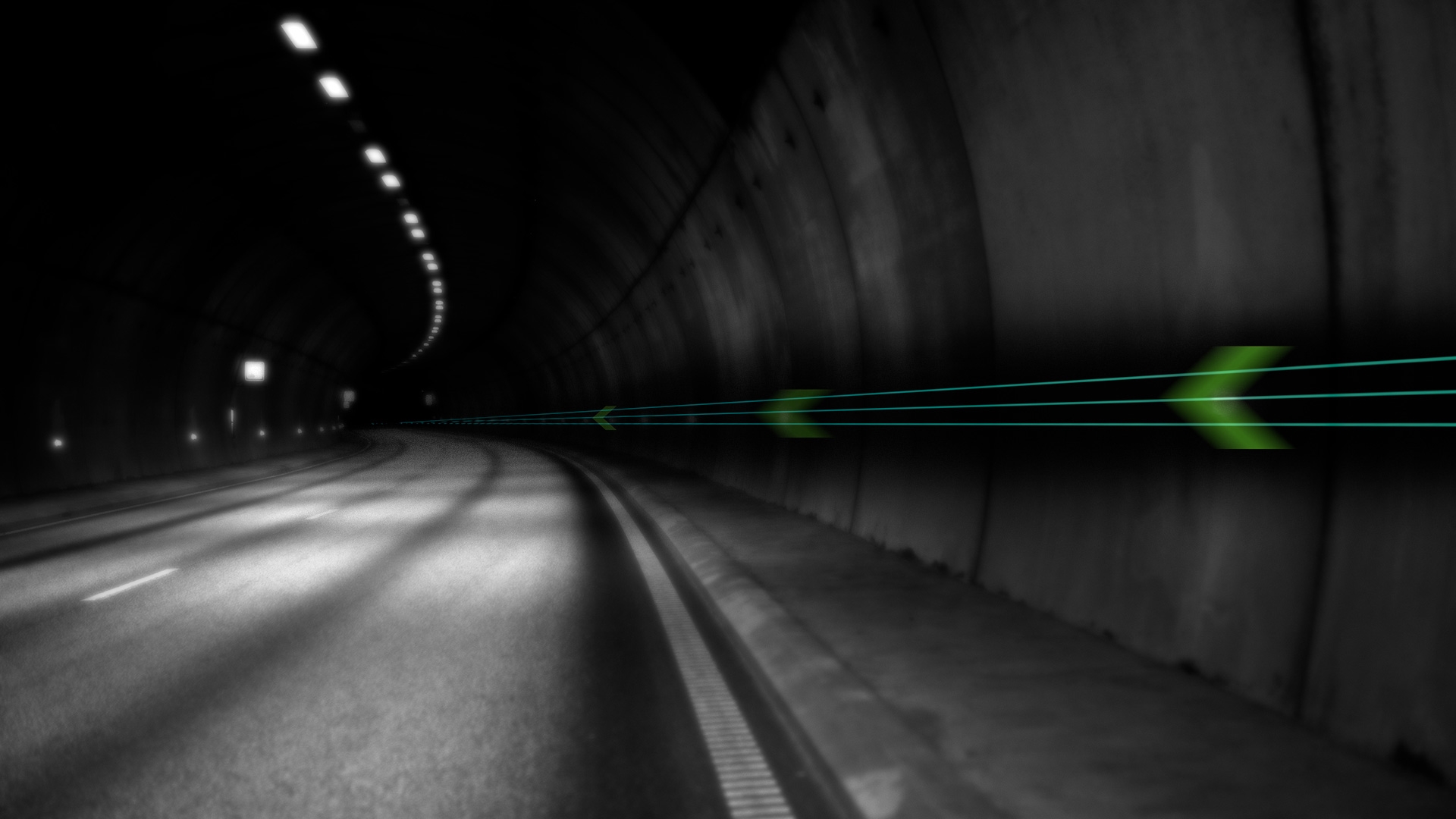 By
Arild P. Sovik Sign & Light 2019-01-13 Hits: 1574
A dynamic evacuation light and sign system, which offers real-time, intelligent control and guiding indication can improve safety in difficult evacuation environments like tunnels. Research points out that during an emergency, people have a tendency to wait for information or instruction rather than seek it out.
If and when people do decide to exit a tunnel in the face of a recognized danger, they have a need of specific instructions to be able to use the emergency solutions best suited for a quick evacuation.

A dynamically system can automatically control and guide people towards the safest escape route and away from danger, when integrated with other safety systems. Dynamic and intelligent evacuation systems can be a more reliable, faster and safer way to control, guide and evacuate people in extreme situations than conventional evacuation systems based on static illuminated exit signs or audio signals.

Statistically a fire incident in a heavy goods vehicle, causes a severe smoke situation after just a few minutes. Smoke and the ability to reach a safe zone during a fire are suddenly the main challenge. To compare with a fire in a modern building, people will normally have a reasonable opportunity to evacuate to a safe zone. In a single tube tunnel, this may be several kilometers away, often an unreasonable prerequisite for maintaining the principle of self-rescue. These severe conditions underline the importance of making good use of time by detecting fire early, closing the tunnel, alerting emergency agencies, getting early smoke control, initiating alert and providing necessary information for a quick and safe evacuation out of the tunnel.

A dynamic evacuation light/sign solution need to be integrated into the Supervisory Control And Data Acquisition System (SCADA system) in order to receive signals and initiate various actions that support a safe and good handling of the incident. We might say that this integration is an Intelligent Transportation System (ITS), and is a technical installation and application that process information to give support and/or control technical installations to provide a smarter infrastructure for transport. In a wider term the connectivity to the future smart autonomous and cooperative car technology can be a part of a dynamic evacuation system, and we can just imagine how effective information can be provided for the road users, in the vehicle, in a calm and more suitable environment for information.

Several innovative companies have delivered dynamic evacuation light/sign systems for tunnels, and a typical installation can be a dynamic light that is integrated to the SCADA system and can utilize information for real time guidance and adapt to real time changes based on the received information from other third-party systems. The dynamic light indicates a direction away from the incident in the tunnel, and supports the preferred evacuation route. Earlier research indicates that human visual perception is highly sensitive to motion and color, the moving light patterns efficiently notify and guide people towards the right direction. For instance, green flashing lights at an emergency exit, if used in an appropriate setting, makes the exit stand out and encourages people to use it. More research is needed in this area, especially to document the effect different type of dynamical information will have on evacuation in tunnels.

A clear advantage of dynamic light systems is that the road user becomes aware of the evacuation message, much better than a static solution. And this extra attention alone will probably influence the road user's action pattern in a positive way. But we need to be aware, when the tunnel is filled up with smoke, dynamic light patterns is not as easy to recognize and maybe not understandable in all situations, and there is a need for dynamic information that work well in a smoke filled environment. Some innovative businesses has introduced dynamic signs, visual on the evacuation path, and can provide information about direction, preferred behavior and distances. These signs facilitate a faster understanding of the evacuation message in comparison to a standard passive evacuation signs. A dynamic sign attract the eye by providing a dynamic pulsing array of light within the emergency luminaire, and implemented on standard exit signs, the message are easily understood by all languages.

How about other studies and work

In 2014, The EU-funded GETAWAY (Generating simulations to enable testing of alternative routes to improve way-finding in evacuation of over-ground and underground terminals) project addressed evacuation planning, smarter signage and a decision-support system for evacuation in railways and metro stations, and introduced an intelligent emergency signage system to direct passengers during the evacuation of a transport terminal. The project partners developed a sophisticated system that exploits environmental data on developing hazardous situations, supported by video technology that analyses the number of people in a given area. The key subsystems are a fire detection and alarm system, image analysis engine, evacuation simulation engine and decision-making engine. The intelligent active dynamic signage system was shown to effectively evacuate large crowds from railway stations. By using new image analysis methods, the accuracy of people counting even in challenging situations such as complex structures and changing lighting conditions can be improved by over 90 %. Thanks to the GETAWAY project, managing safe evacuation in rapidly changing and complex rail and underground environments have become much less challenging.

The GETAWAY project underlines that implementing a dynamic light and sign system is more than installing lights and signs, it is also to implement an intelligent understanding of the situations that can occur, and the tools to analyze, simulate and make the right decisions in each scenario.