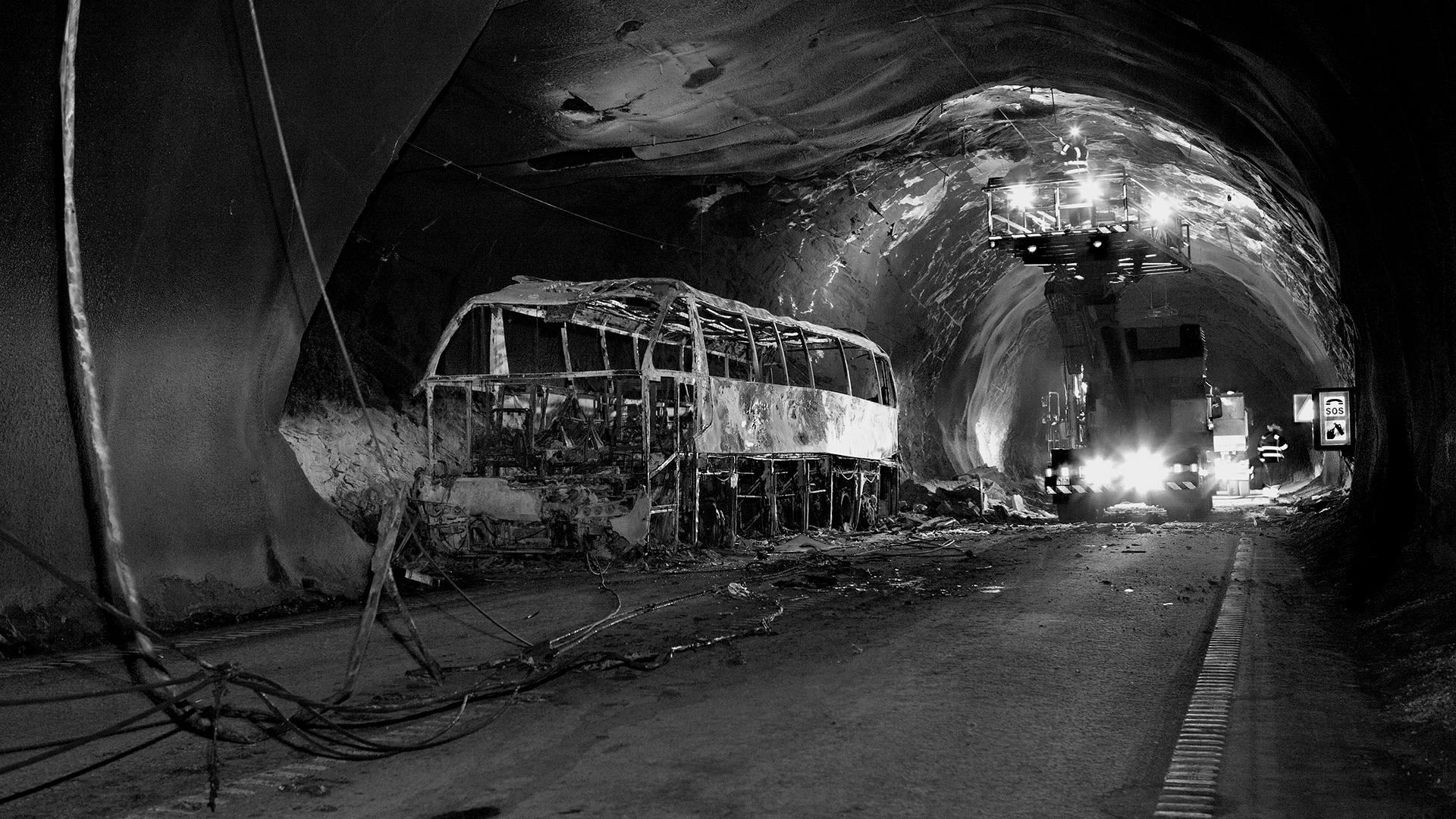 Introduction to fires in road tunnels

Statistically a fire incident in a heavy goods vehicle, have a severe smoke situation after 7 to 10 minutes.

Smoke and the ability to reach a safe zone during a fire is the main challenge. The heat from the fire are also a severe risk and can effect gradually large parts of the tunnel. Fire in a modern building will give a reasonable opportunity to evacuate to a safe zone. In a single tube tunnel, this may be several kilometres away (8 km in the Gudvanga tunnel fire in 2013)! Often an unreasonable prerequisite for maintaining the principle of self-rescue.

In tunnels with unidirectional traffic (two tubes) the ventilation direction, wind draft and traffic direction is normally the same. The smoke affect gradually the empty part of the tube in front of the incident. People that are stuck in traffic behind the incident can easily evacuate to the other tube, and are normally not affected by the smoke. The second tube will normally close and this is considered a safe zone to evacuate to. There is also a safe evacuation passage between the tubes. Emergency services can come to rescue in the direction of traffic or through the emergency passages between the tubes. Incidents in tunnels with unidirectional traffic is normally a situation that can be handled, but mitigating measures is needed to make sure people react instantly and evacuate early through the emergency exits. In unidirectional tunnels with traffic jam (traffic queue in front of the incident) the risks can be different and may have need for additional mitigating measures.

High gradient before or in a tunnel give an increased risk of technical problems in heavier vehicles and is the main cause of fires in such tunnels. High speed, when driving into the tunnel, can increase this risk. Technical problems may be due to weaknesses in vehicles and/or lack of knowledge and experience (driver).

Serious incidents that challenge the self-rescue principle is primarily incidents with large fire effects and causes a severe smoke situation, and mainly incidents involving heavier vehicles. Leading experts are not too worried about fires in small vehicles. But still, a fire in a small vehicle can turn into a larger fire, involving several vehicles, and should be a part of the risk assessment.

A steep evacuation route may effect the ability to perform self-rescue. Tunnels with a steep climb may have need for additional mitigating measures.

The ability to give necessary assistance from the emergency services can affect the consequences and are important to discuss in a risk analysis for all tunnels over 500 meter. I recommend to carry out a separate assessment of preparedness for each tunnel.